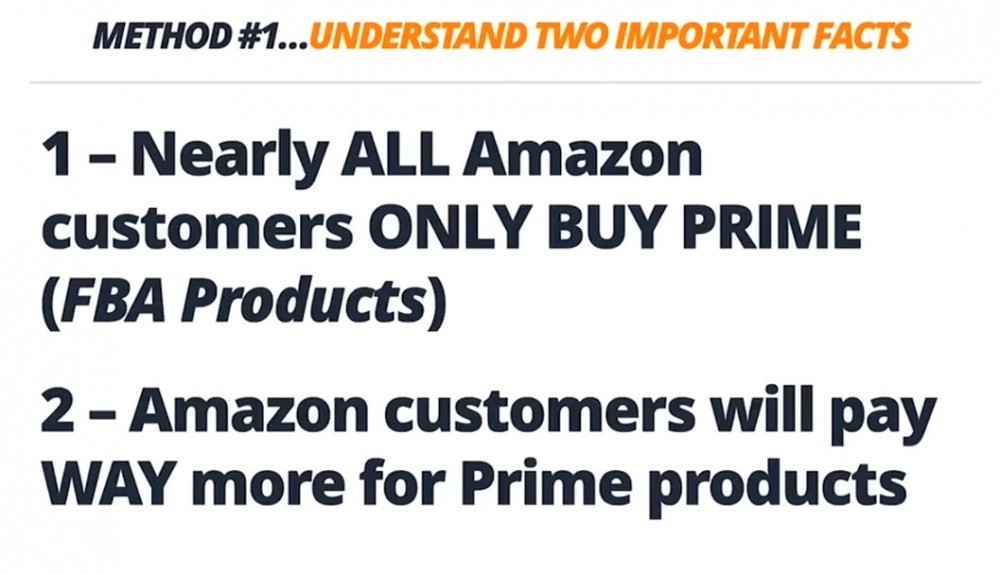 Fact number one is that more than 80% of Amazon customers only buy Prime eligible products, that is those products with a little Prime symbol beside them. 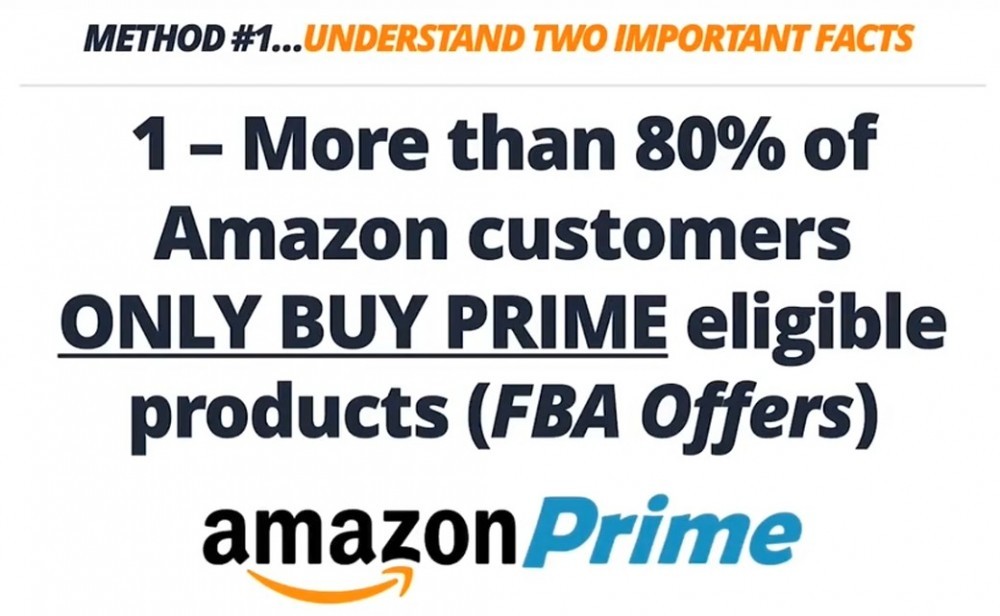 You can see the symbol on the above screenshot, right? So 80% of customers only buy a product if it has that little Prime logo. Another way to say that is… 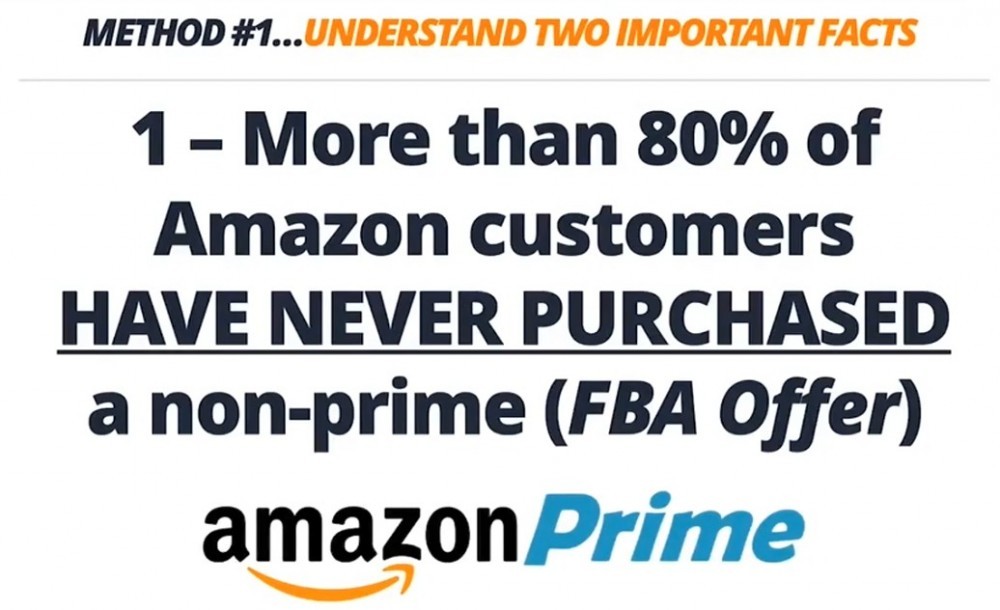 You or someone close are probably prime members. Whether you’re international or not, what that basically means is you’re signed up to a service with Amazon that allows you to get a lot of perks like free 2 day shipping, and a lot of different potential perks.

In fact, I know a lot of people who are probably like me in the sense that they’ve got the prime filter on, which means they only see prime products.

With prime filter on, you don’t even see anything other than prime. So that’s fact number one. Vast majority have to see that little prime symbol to actually buy. 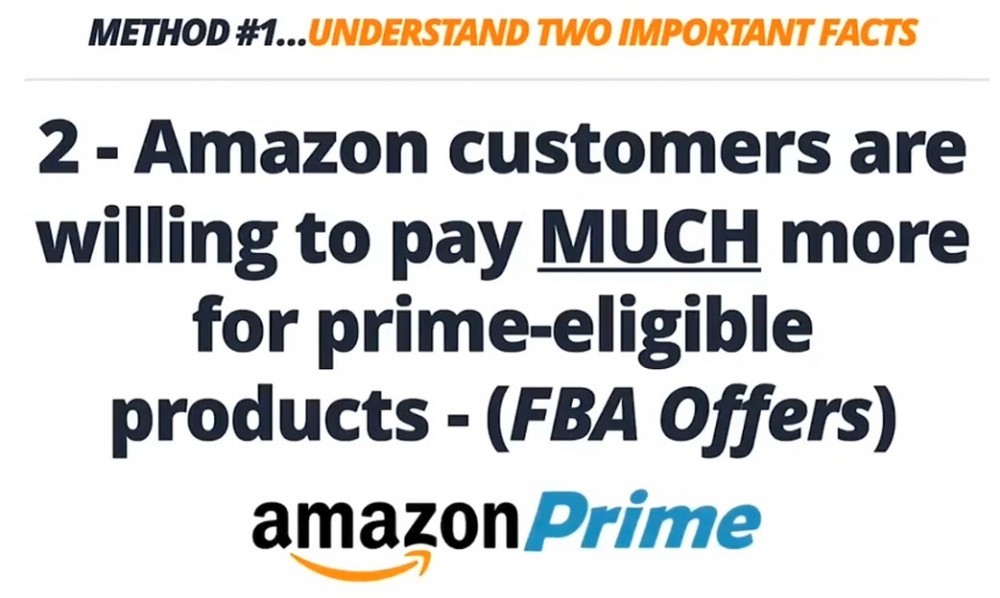 … Amazon customers are willing to pay much more when they see that little prime symbol.

So that’s really important to know. Most people won’t buy unless they see prime, and if they do, they’re willing to pay much more when they do see it. Okay, those are the two really important facts.

How Do Products Get that Little Prime Symbol?

Now the next piece that you need to understand is how do products get that little symbol beside them? It comes down to really where that product is. 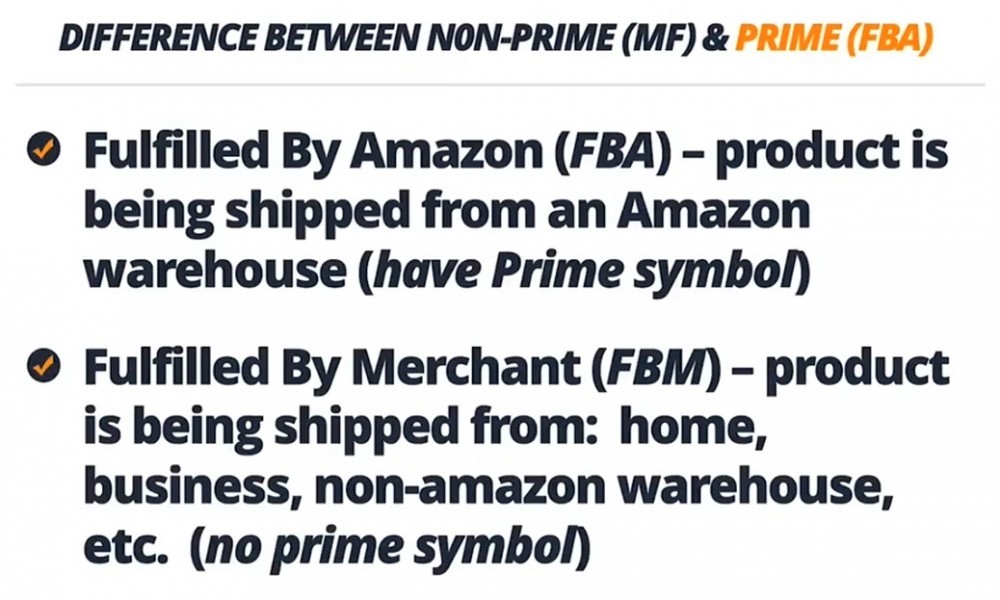 That’s the main differentiation between how an offer gets that little Prime logo and how it doesn’t. We call it FBA or Fulfilled by Amazon when it has the little prime logo. So anytime Amazon is fulfilling the product, it’s going to get that logo.

How We Generate Profits 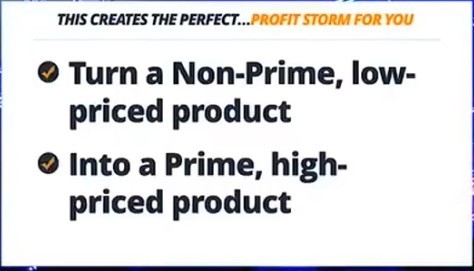 Here’s how we generates profit for ourselves. The above two facts create a perfect profit storm for us. Here’s how…

A Specific Example of How to Sell Used Books on Amazon

Let me show you a specific example of this, and I think it’s going to be really clear. You may have to click on the “See All Buying Options” button on Amazon to see something similar to the screenshot below.

If you’re a typical customer, you’re focused on prime, so you can buy it for $174 okay, that sounds great. Right? Again, textbooks, as you know, are really expensive. If you’ve been to college, you know how expensive these are.

However, if you uncheck the Prime box and look at the non-prime offers you start to see this: 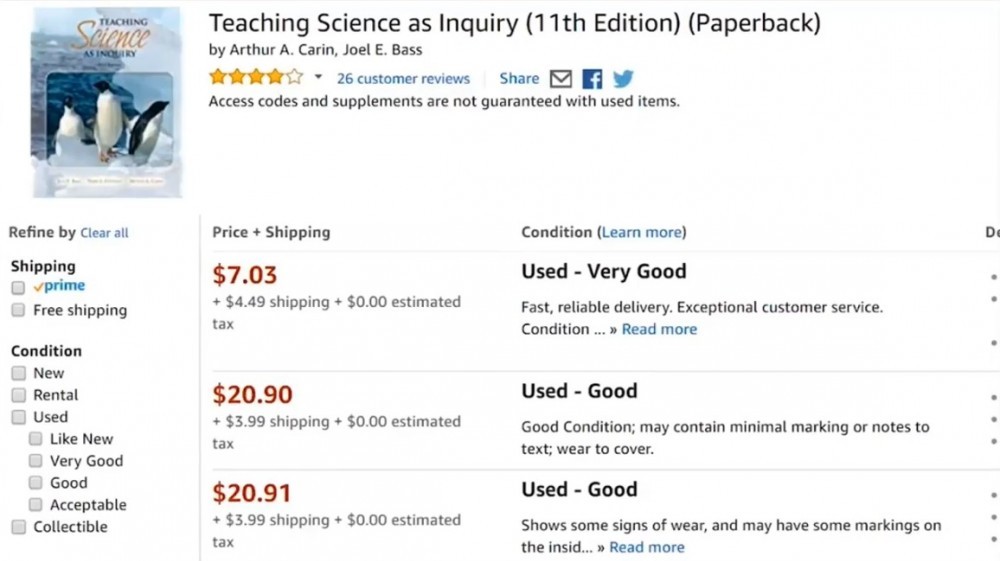 So here’s what we’re going to do. We are going to buy this book, non-prime for $11.52 cents. Once we get that book, we will then ship it to an Amazon warehouse and sell it FBA. This is called book flipping or arbitrage.

Remember what happens once Amazon gets it?

Now that we’ve taken this textbook, turned it from non-prime to prime and taking advantage of that, and after all Amazon fees are paid, we’re done for this particular book. We can make $130 profit. 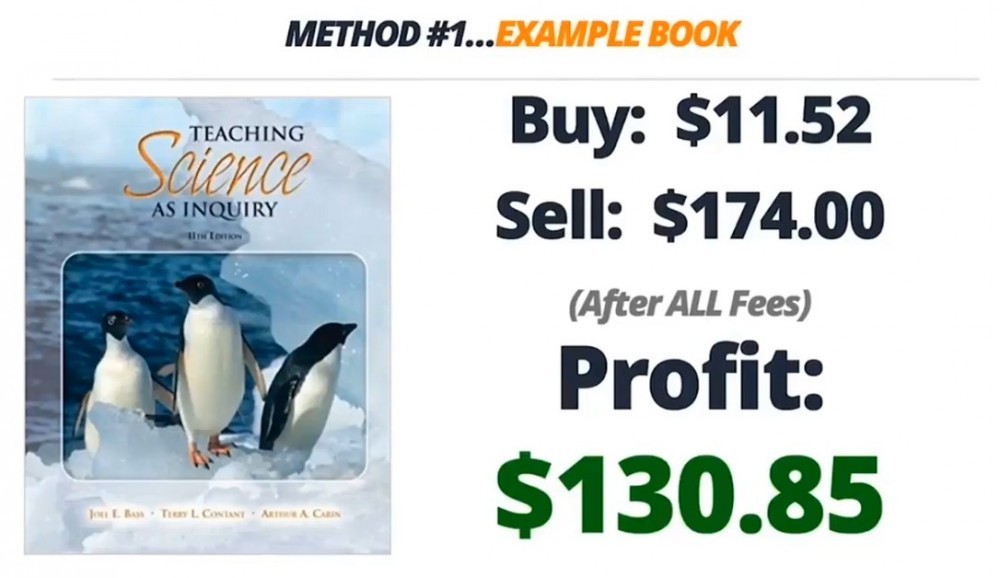 So here’s the basic concept of method one and we’ll really dig into this. Okay, we’re going to buy a non-prime (non FBA) textbook for this particular example for a low price. Very few people see this and do this method. 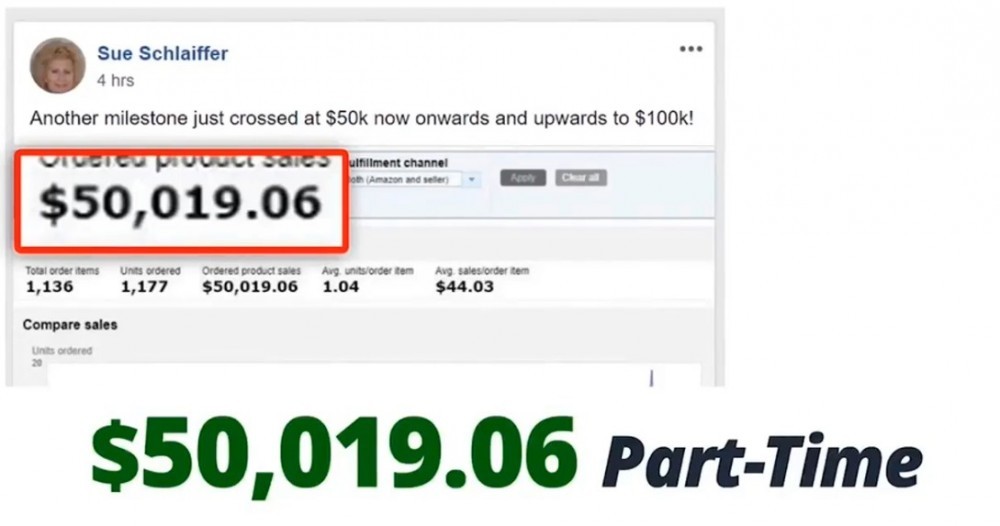 Screenshot of Sales We’ve Made

Let me show you some sales that we’ve made.

As you can see in the above screenshot, people have paid for these textbooks and they got good deals on them. I mean, these are just really expensive books when you’re in college and graduate school.

It’s very common to see high priced books like this and to be able to sell books of that price. That’s just what college textbooks cost. So it doesn’t take very long when you’re selling books at that high of a profit and that high of a dollar figure to get the results. 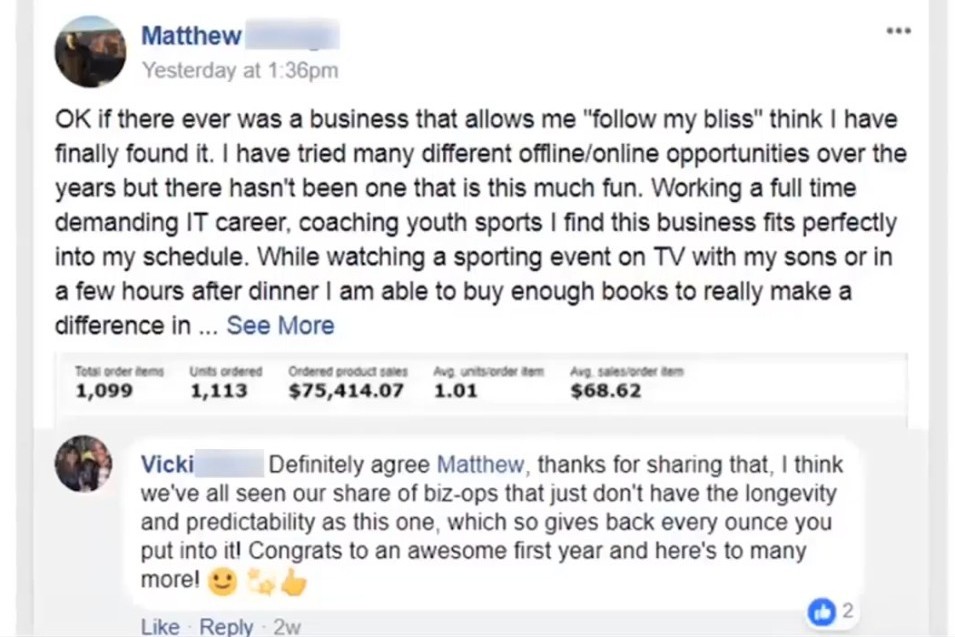 You can see he’s done over $75,000 actually, he’s at $100,000 now. Matthew has kids. He coaches people sports and you can see here he said, he’s tried many different opportunities over the years, there hasn’t been one that’s been this much fun.

“Crushing It!: How Great Entrepreneurs Build Their Business and Influence—and How You Can, Too” by Gary Vaynerchuk